The Missing Season by Gillian French 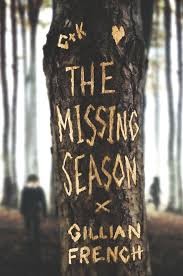 From the author of Edgar Award finalist Grit and The Lies They Tell comes a tense, atmospheric novel for fans of E. Lockhart and Marieke Nijkamp, about friendship, truth, and the creeping fears that can’t be outrun.

Whenever another kid goes missing in October, the kids in the old factory town of Pender know what is really behind it: a monster out in the marshes that they call the Mumbler.

That’s what Clara’s new crew tells her when she moves to town. Bree and Sage, who take her under their wing. Spirited Trace, who has taken the lead on this year’s Halloween prank war. And magnetic Kincaid, whose devil-may-care attitude and air of mystery are impossible for Clara to resist.

Clara doesn’t actually believe in the Mumbler—not like Kinkaid does. But as Halloween gets closer and tensions build in the town, it’s hard to shake the feeling that there really is something dark and dangerous in Pender. Lurking in the shadows. Waiting to bring the stories to life.