The Friends We Keep by Jane Green 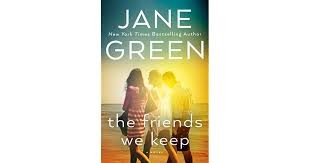 The Friends We Keep is the heartwarming and unforgettable New York Times bestselling novel from Jane Green, author of The Sunshine Sisters and The Beach House. Evvie, Maggie, and Topher have known one another since college. Their friendship was something they swore would last forever. Now years have passed, the friends have drifted apart, and they never found the lives they wanted—the lives they dreamed of when they were young and everything seemed possible.  Evvie starved herself to become a supermodel but derailed her career by sleeping with a married man.  Maggie married Ben, the boy she fell in love with in college, never imagining the heartbreak his drinking would cause.  Topher became a successful actor, but the shame of a childhood secret shut him off from real intimacy.  By their thirtieth reunion, these old friends have lost touch with one another and with the people they dreamed of becoming. Together again, they have a second chance at happiness...until a dark secret is revealed that changes everything.  The Friends We Keep is about how despite disappointments we’ve had or mistakes we’ve made, it’s never too late to find a place to call home.